1982: The Rothmans Livery is regarded by many followers of Group C racing to be among the best ever seen on a 956. Following a briefing we put our design ideas onto a 1:5 scale model at the design studios in Weissach. The design was quickly approved and soon we found ourselves in the paint shop with a white 956 - the very first - number 001. The rest is racing history.

The Porsche 956 was built to comply to the new Group C regulations which were introduced in 1982.

It featured an aluminum monocoque which helped it meet the 800 kg minimum weight for this new racing series.

These pictures show the first Rothmans painted car. The slide show captures the loading of the car into the transporter and the unloading in Weissach. The car was then presented to the racing department which meant that among others, Norbert Singer and Peter Falk cast their eyes on the new colours. Looking back its fair to say that everybody approved and liked the design though discussions immediately started about the absence of PORSCHE and why the start number was located at the rear of the side - something to this day I dont know.

Following its presentation various changes where made to the livery including the addition of the PORSCHE name, the stripes stopped at the Rothmans logo and the start number was moved to its normal position.

For the 1983 season the stunning wrap-around stripes would be replaced by the central Rothmans stripe only. Bringing the car into line with other Rothmans sponsored cars and making it much easier to paint!

The Jacky Ickx and Derek Bell car shown here was raced at the 1982 24 Hours of Le Mans. It led the race for the entire 24 hours eventually taking the overall win. The 2 other works 956s took second and third place. 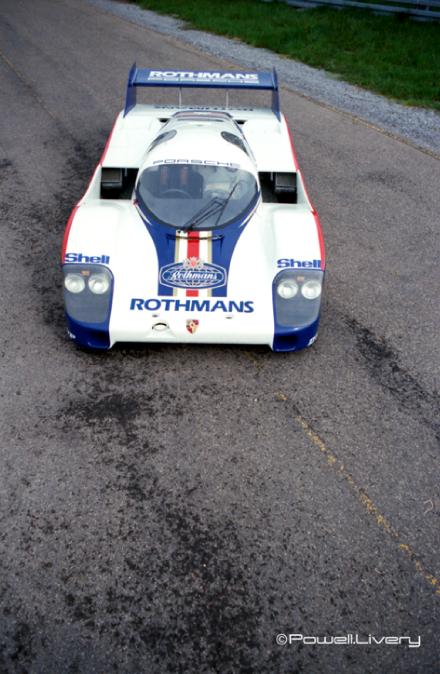 Jacky Ickx sits in the 956 waiting to go back on to the test track.